Baby et Lulu is the charismatic musical partnership between Abby Dobson, songstress extraordinaire and former frontperson for the platinum selling Leonardo’s Bride, and Lara Goodridge, violinist/singer with the celebrated string quartet FourPlay. Australia’s vivacious French-language chanteuse duo, along with their superlative band, including Marcello Maio, Matt Ottignon, Julian Curwin and Mark Harris, pay tribute to the great singers and songwriters of France with panache and joie de vivre. It’s a rendez-vous you don’t want to miss!

Having released their self-titled debut album in 2012, Baby et Lulu have been touring the east coast and over the past year have performed venues and festivals including The Famous Spiegeltent at Melbourne Festival, Paradiso Spiegeltent at Adelaide Fringe, 2 SOLD OUT shows at the Adelaide Cabaret Festival on the main Festival Stage, Port Fairy Folk Festival, Blue Mountains Music Festival, The Capital Jazz Project at The Street Theatre in Canberra, as well as venues in capital cities and beyond, mostly to sold out rooms.

ABC radio has had the album on high rotation nationally, and Baby et Lulu have performed on almost all shows that feature music and interviews including Thank God It’s Friday with Richard Glover, The Music Show with Andrew Ford, plus interviews and performances with Deborah Cameron, Richard Stubbs, Simon Marnie, Adam Spencer and more. They have also performed on Channel 7’s The Morning Show and Studio At The Memo with Tim Rogers. The album and show is an eclectic mix of classic and contemporary songs written by some of the 20th century’s greatest French songwriters. From romantic songs about strolling along the Champs Élysées and a much loved Cole Porter jazz standard, to tracks made famous by cultural icons Edith Piaf, Brigitte Bardot, Serge Gainsbourg, Charles Aznavour, Camille and Françoise Hardy – Baby et Lulu have collated a passionate tour de force of French song. There’s even an unexpected gift: a stunning French language rendition of the platinum-selling, “Even When I’m Sleeping”, originally sung by Abby herself in Leonardo’s Bride.

Abby and Lara became fast friends after Lara saw Abby perform at Sydney’s Basement one evening, was completely enamored, and offered to release Abby’s music on her new female-focused music enterprise, Craving Records. They soon realised they shared a love of vocal harmony and a passion for the romance and music of France. Later, they happened to be holidaying in Paris at the same time. Once Lara had purchased a book of early 20th century French popular songs, and the pair met to discuss the music in a Parisian café over French cigarettes and chocolat – the rest soon became history!

Make sure you hear the romantic and enchanting beauty so well captured onstage by Baby et Lulu and on their debut album. 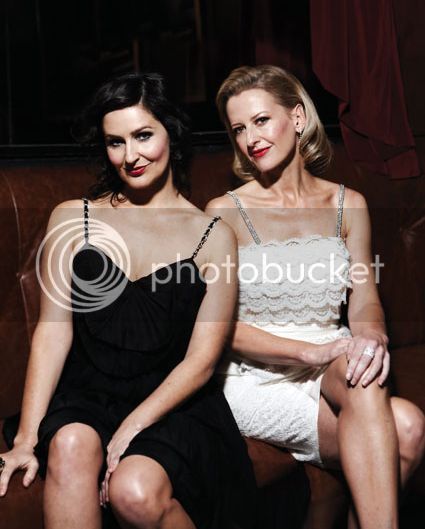 ‘With blithe spirit, old material is made new, yet again.” – Alistair Jones, The Australian

“Dobson and Goodridge had the seated audience eating out of the palms of their hands… and pranced off stage to the sounds of a standing ovation.” – The Drum Media

“Baby et Lulu, a couple of unabashed Francophile chanteuses, put on a show that leaves their audience feeling as refreshed as a bottle of sweet white wine rather than Cabaret’s standard night on the red.” – AussieTheatre.com

“They have a tongue-in-cheek rapport and their voices blend beautifully as they roll out hits…Dobson’s French adaptation of her hit single Even When I’m Sleeping was a highlight and Goodridge plays a mean fiddle.” – Adelaide Now

“Arriving to the packed out Festival Theatre main stage, it was clear the très charismatic pairing of sexy songstress’, Abby Dobson and Lara Goodridge, AKA Baby et Lulu, have earned themselves a strong following of baguetteloving-baby-boomers” – The AU Review

“Chanteuses Abby Dobson and Lara Goodridge in slinky, tight frocks and showing some leg — as part of the 2013 Adelaide Cabaret Festival — was advertised as ‘a sassy romance in Paris’ and did not disappoint.” – Maggie Tate, Global Media Post

‘Lara Goodridge and Abby Dobson combine their amazing talents in an explosion of French chic. After hearing some of their tunes it is hard not to appreciate the talent that is Baby et Lulu.” – Alt Media Group